In many fantasies, particularly in very popular YA fantasy series, magic seems…well…magical. Things happen, for no reason beyond the quick application of a magic wand. Is it possible to make magic systems consistent? Who are some authors who’ve managed to achieve this?
L.E. Modesitt Jr., Tim Powers, Pat Rothfuss, Jo Walton (m), Gregory A. Wilson 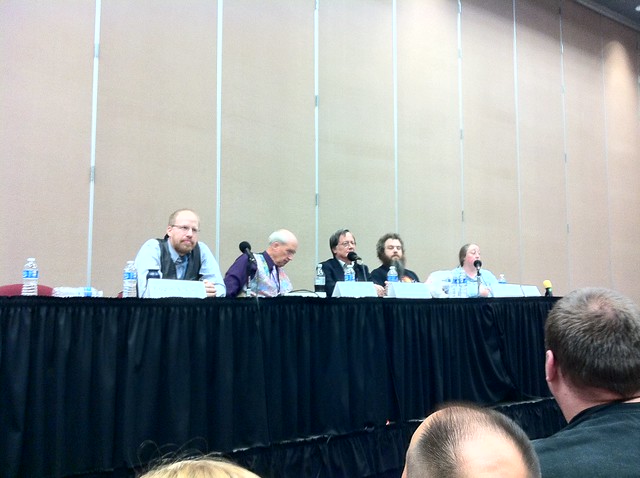 Jo opens with a statement that the panel description seems very in favor of magic not being magical. She feels that consistency does not exclude true magical systems.
Wilson says it can be and should be, he's a professor of English and author.
Modesitt is an author and believes they should be both.
Powers agrees with Lee that on the one hand you want your magic to have limitations, but you don't want it to become technology. LE says he just invalidated almost every one of his books.
Rothfuss says that he thinks it's a spectrum between rule-driven and poetic, as I heard him say elsewhere.

Man, this was seriously an amazing panel. Man. I wish I had been able to capture more of it.

For thousands of years, if you traveled anywhere, you walked. Taming horses for travel was a huge leap forward. Have fiction writers over the last 100 years really understood the details of “pre-motor” travel? Join horse and history experts Ellen Asher and Melinda Snodgras for an analysis of what it was really like to go cross country via horse.
Ellen Asher, Melinda M. Snodgrass


They're astonished at the high turnout. Apparently they've done this panel many times, but never had more than a handful of women show up. The room is packed, with men and women both.

For someone (like me) who has very little experience with horses in more than a casual way, this was a very informative panel, if somewhat scattered. The impression I got was that in previous panels they'd done, it was mostly back and forth with a small audience and very chit-chatty, which is harder to do when you pack a room.

Minority representation needs to get better in our visual SF, including casting in film and TV and the design and selection of cover art. A discussion of what’s wrong with the status quo and how the industry can and should improve. Aliette de Bodard, Lee Harris, Lee Moyer (m), Naamen Tilahun 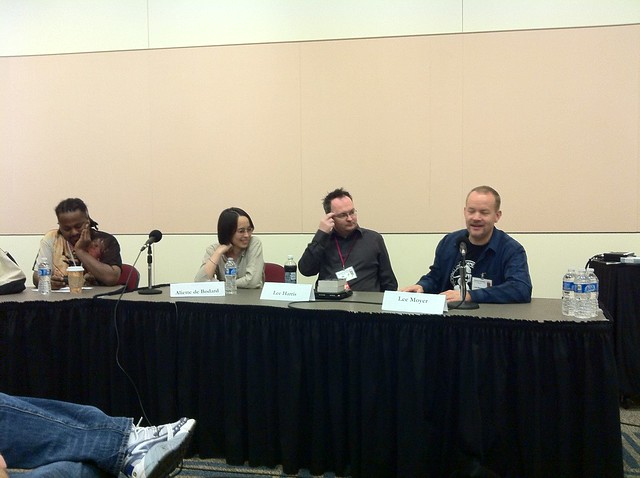 Pretty small turnout, although more people did trickle in as the panel went on.

This wound up being a very dynamic, informative panel with good back and forth with the audience. I would love to see more panels like this.

How can two cats have identical DNA and yet look and act differently? What’s going on? Speculation on what we might not know and why cloning might be a whole lot more complicated than we think.
Nancy Kress, Sam Scheiner, Joan Slonczewski (m), Dan Wells, Patricia Wheeler


I came in 15 minutes late, so I basically have no idea who these folks are...

Slonczewski is, um...a very assertive moderator. I'm not sure how well that worked here. Anyway, decent panel, I was sad I missed the start of it.

Panelists provide examples of historical events in which time travelers clearly intervened to produce what we know as the historical outcome. For example, Archduke Ferdinand is assassinated in Sarajevo when his driver makes a wrong turn at the exact corner where an assassin who had earlier failed to attack the Archduke happened to be standing, and World War One breaks out. Eric Flint, John G. Hemry (m), Mary Rosenblum, S. M. Stirling, Harry Turtledove


(Again with the no picture. It didn't help my remembering that I was limited to my iPhone, since my Canon was malfunctioning.)

This was an OK panel, but once again had so many non-questions from the audience. I was pleased the one time the audience member asked about the "constitutionality of the welfare state" and everybody on the panel just gave this withering glare and the response was "I think we should probably stay away from politics. Next question."

How does an author introduce superbeings into a work without pushing the human characters into insignificance? Gods are often gigantic projections of human characteristics. Can they serve other functions as well? Why are polytheistic settings so common in fantasy? What sources are authors using, and why? Why do readers find them so compelling?
Brenda W. Clough, Brandon Sanderson (m), Carrie Vaughn

Brenda is ms. Not appearing. A desperate appeal for panelists goes out.
David Locamp? Volunteers as a panelist because he's been a Wiccan Priest for 40 years.
Matt Rotundo is a writer, he was volunteered by Carrie
Carrie is a writer who has had gods as characters.
Brandon is texting Rothfuss...

This was, for a largely impromptu panel, extremely enjoyable.

Far future SF has been a staple of the genre since before the genre existed. How does this particular SFnal trope reflect the time in which the stories are written—the hopes, fears, concerns, and limitations of the then-present day. What can we learn by examining the far future fiction of the recent past and this coming fall?
Howard V. Hendrix, Kay Kenyon, Louise Marley (m), Larry Niven, Alastair Reynolds 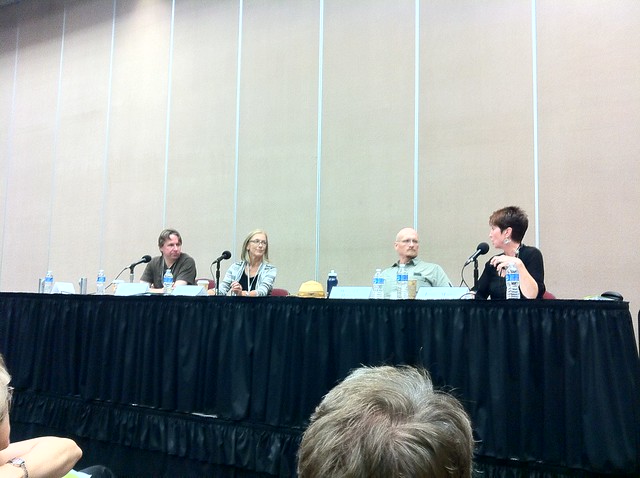 Not much to say about this one, really. It was fun, though.

Tim Powers and David Goldman have been having a discussion on Free Will over the years. Join in on the latest chapter of this dialog.
David W. Goldman, Tim Powers 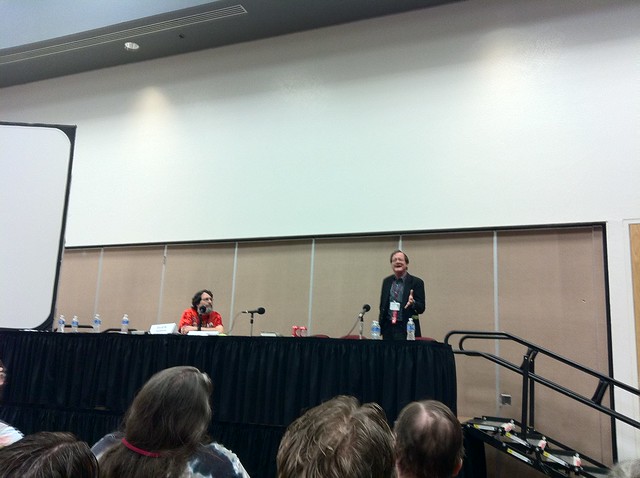 This, unfortunately, was a dialog that I don't really believe could ever have reached a satisfying conclusion, because Tim obviously believes, and David obviously does not. There's not (usually) going to be ground given when it comes down to that.

Fandom Online: Is the Argument Over? What Was (Is?) the Argument About?
Many SF fans are part of the online community too. Yet we seem to keep emphasising opposition rather than overlap. Are some of us always looking for a fight or is there still real cause for concern?
Claire Brialey, Chris Garcia (m), Teresa Nielsen Hayden, John Scalzi

Chris Garcia is the moderator, and hilariously needs no microphone as he reads the panel description.
TNH says the big question is if a certain person (whom I will not name) is at this convention or not.
TNH introduces herself as a fan, so does Scalzi. Chris writes a fanzine.
Brialey is Ms. Not-Appearing-On-This-Panel

What's interesting to me is that I came away from this panel feeling that all of the panelists were all “Duh, of course there's no argument, online is where fandom happens, now,” where another person I know who attended this panel came away with all the nostalgia stuff as primary. Weird.

Is it possible that the laws of physics behave differently in different parts or times of the universe? How would that impact world creation? Would biological development even happen, or might intelligence arise in some other way?
Gregory Benford, Ctein, Steve Gillett, John G. Hemry, Alvaro Zinos-Amaro (m)

No picture for this one, sadly.

Hemry writes as Jack Campbell, largely hard SF
Steve Gillett is a geologist, wrote a book on designing believable planets, jokes that he largely ignored physics when doing so
Ctein is a former physicist currently living as a photographer and writer
Alvaro is a fan
Benford is not here (yet?)

( Collapse )
How can people take this long to ask questions! Good lord.